On the right or at the left of the screen there is a panel with Channel lists. Between the list panel and video panel is a Splitter, directing the cursor on which, you can change width of the panel. Some lists of channels appear right after installations (Recorded, YouTube). Others, are added after a choice by you of devices and services and after a channel search.

Lists are organized like tree structure (same in Windows) – Lists -> Folders Group by…( if you use it) -> Channels (files). For move from level to level in the OSD use panel button Left arrow – Right arrow. In each of these levels, you can create your own additional folders and subfolders. 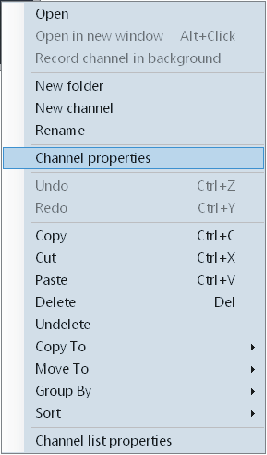 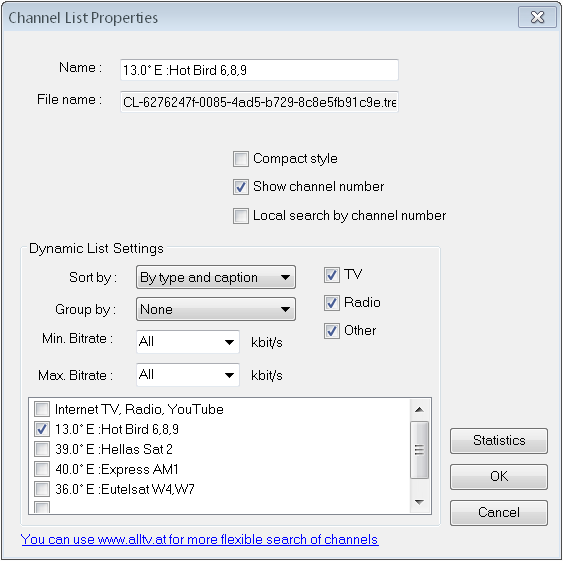 In the same place, in Properties of the channel list you can tune its parameters: the Name, the Style, Sorting and Grouping and, also to select display of channels and lists necessary for you. In the Channel list are displayed: the Channel number, an EPG, Channel type, the Caption and the Logo. You can to set as a list Compact style (displays only the type and title of the channel).

To set numbering it is possible as manually (in channel properties), and automatically ( Menu  panel -> Edit -> Renumber).

Also in the list operations with relocation, copying and an insertion (paste) of channels and folders both in one list, and between lists are accessible. For example, for relocation it is enough to push and, retaining, to move the channel under the list.

If you want to Undo and Redo change which have been made in the list press Ctrl+Z or Ctrl+Y (it is possible just before next program start).

Order to after scanning the earlier remote channels by you, were not added again in the list, in the program there is "recycling bin" where they are. For display them click on Undelete (list context menu). Sometimes, channels found at scanning are not added in the list. In this case, is mandatory check up, whether they have been earlier remote. As, it can happen, if the title of the channel has been changed by the provider, and the channel with same SID already exists in the list. Then simply push on Update in properties of the "old" channel.

Operations with channels are accessible from the Menu panel -> Edit, or from the context menu.

In the Channel properties it is possible to look and edit channel settings. 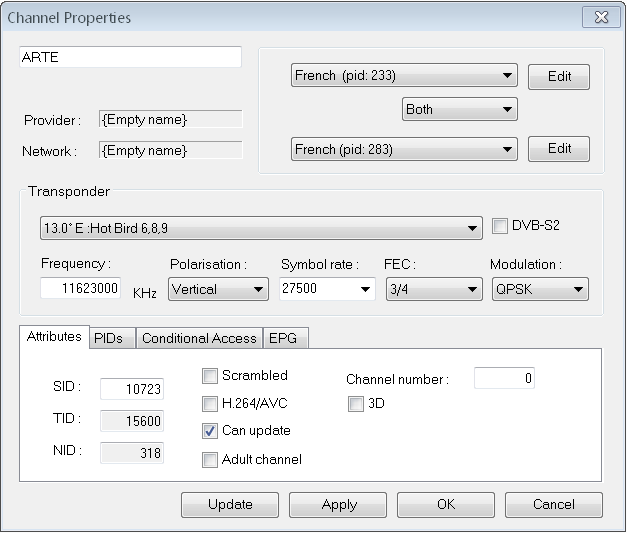 At not clear problems with lists you can delete ALL files from folder “Channels” and to scan anew.