The ProgDVB is universal and powerful tool for receive, watching and listening analog both digital a TV and broadcastings from any sources (satellite, cable and on-the-air TV, Internet etc), and also review of media files with transmission possibility all of this via various types of networks. 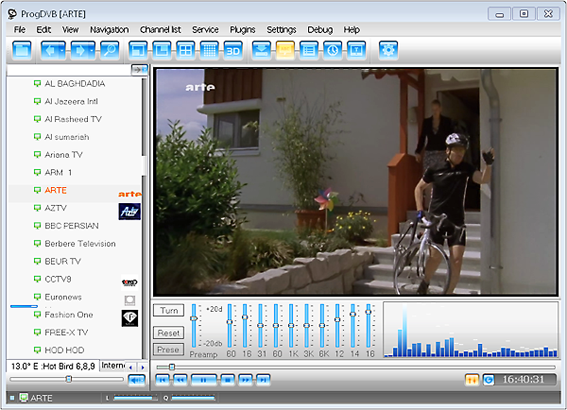 By means of ProgDVB you can watch HD telecast, do output the picture on several monitors (including on TV set), viewing by means of CI scrambled channels, record the yours liked programs, use YouTube and Internet TV, Radio. You can use one program for several types a TV and broadcastings irrespective of an amount of devices and type of received content (DVB-S, DVB-S2, DVB-C, DVB-T, ATSC, ISDB-T, IPTV).

- record in all main formats, including *.ts

- adjustment of language preferences of audio streams and subtitles

- possibility of a choice and editing of the interface (Skin Editor)

- numeration, sorting and grouping of channels

- TV program guide and logos in the channel list

- possibility of a choice of a demultiplexer

- color correction of the picture with a profile choice